Back in November 2019, I arrived early to an event and was grateful to find an accessible parking place. Unfortunately, when I returned several hours later, I found a vehicle parked in the blue striped area, called an access aisle, which blocked access to my side-loading van and ramp.

In this area of Louisville, the Highlands, it could be hours before the driver might return. It was 9:30pm and I had to get up early for work the next morning.

So, I did what I’d never done before: I called Louisville Metro Police Department to ticket and tow the vehicle.

In 30 minutes, two police officers arrived. I explained the situation. The officers told me that, although the person was parked in the access aisle, Louisville Metro Police wouldn’t ticket the vehicle, primarily because it was on “private property,” and they couldn’t have it towed.

The vehicle in question was clearly at fault, but I was the one punished.

A week later, I was talking with a friend, Liz Fust, who runs Gathering Strength. Liz also uses a chair and a side-loading van. She is a lawyer and looked into the Louisville parking ordinance and state statutes.  The Louisville ordinance allowed the police officers to ticket the offending vehicle, even if I was parked in a private business’s parking lot. But the ordinance did not empower the police to tow the vehicle.

Liz reached out to the LMPD Major in charge of the district where this occurred, and the Major agreed to emphasize the ordinance with officers so they would be reminded of its requirements and penalties.

The first – and easiest advocacy option – was to address the local ordinance, rather than state statutes. Liz reached out to her councilman, Bill Hollander, as well as Brandon Coan, the councilman representing the Highlands.

Liz researched other cities’ and states’ laws, and after we both read through the legal-ese, proposed to the council members a number of changes to improve the ordinance. The councilmen worked with the County Attorney’s Office and Public Works to draft proposed language. After some back and forth and a little compromise, meaningful changes were made to the accessible parking ordinance in Louisville.

Changes to Chapter 72 include the following:

Seriously, guys. This was passed! This ordinance applies to any parking open to the general public in Louisville Metro.

Police officers can no longer say, “We can’t tow the vehicle.”

The coronavirus crisis complicated and stalled our hope for a larger media campaign about accessible parking. The public is generally ignorant about why access aisles are so important. But that’s no excuse not to park in between the lines or to illegally park.

We need to create a campaign to inform the general public – as well as everyone who gets an accessible parking placard from the County Clerk – not to park in access aisles. (We’ve all seen it.)

The LMPD Major we talked to is willing to re-emphasize the parking ordinance changes to LMPD officers so they know what they can do (TOW!). But I’m still going to keep a copy of the ordinance in my vehicle or purse… just in case.

Let’s push for all enforcement officers to be trained on how accessibility in public spaces, especially parking, is vital to our equality.

We’re not done. The state statutes on accessible parking need to be improved so everyone throughout the state has better access to our communities, and so there are real penalties for not following the law.

Hopefully, with training, awareness, and advocacy, we will change the future.

Actually, I think we just did.

Many thanks to Councilmen
Brandon Coan and Bill Hollander! 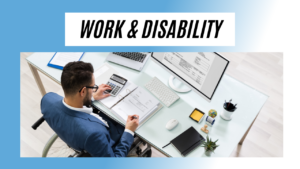 Working after a spinal cord injury may seem overwhelming. But you have finished up rehab or completed schooling, and you’re ready to go to work. 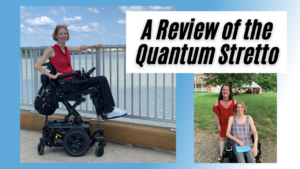 A Review of the Quantum Stretto Power Wheelchair

In my article How to Choose a Perfect Power Chair, I outlined my steps to look for…well, a perfect power wheelchair. In January 2021, it